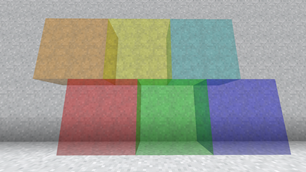 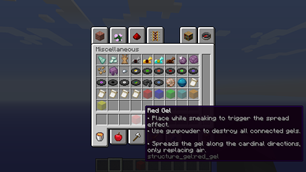 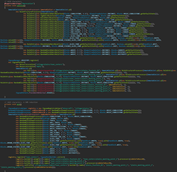 An API for simplifying the developer end of creating generated structures.

Structure Gel is an API mod designed to make creating structures easier on the developers, specifically ones using the jigsaw system. All code is open source and documented. Some of its features include:

You can find detailed information on how to develop and use this API by Minecraft version.

For an open source working example of this api, check out Dungeons Plus

This block is a creative tool to fill the insides of structures easily. The gel is replaced with air when your structure generates while all air is ignored when being placed. This ensures that your structures won’t have natural terrain where it shouldn’t be. The gel block behaves similarly to structure voids in that you can walk through it, while actually being visible.

When placing gel while sneaking, you can trigger the spreading mechanic. Each gel spreads differently, and you can read how they work by hovering over the item.

Blue gel functions similarly to red, except it won’t spread into locations where the sky can be seen.

Green gel spreads the same as red gel, with the addition of also spreading diagonally. This allows it to get through corners created by vines or other complex builds. Be careful not to let it leak outside of your build.

Cyan gel acts as a combination of green and blue gel, by both spreading diagonally and avoiding the sky.

Orange gel behaves the same as red gel, but the distance it spreads is determined by how many you’re holding when you place it, making it handy for builds in open areas.

Yellow gel will only spread along the plane that you’re facing when you place it, making it great for sealing off walls, windows, or other holes that the gel would otherwise go through.

Gel can be removed by using gunpowder on it. Doing this will trigger a chain reaction, removing all connected gels of the same type.

Here’s an example of how it could be used in a build. If this structure were loaded into the game, the gel inside would be replaced with air, while the air outside would not be placed.

The code for this block is designed in a way such that you can easily extend it and hook into its behavior with methods in blocks.IStructureGel, should you need behavior not already implemented.

This is a core mod that modifies a few internal classes. If you get a crash with this mod that only occurs when mixed with another mod, this may be the cause. Please test before reporting.

🤚 Support: If you have questions or any issues with our mods, read the FAQ! You can also either submit an issue on the issue tracker, or come into our Discord server where we can help you! 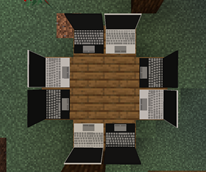 Save and Load Inventories