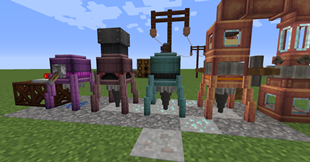 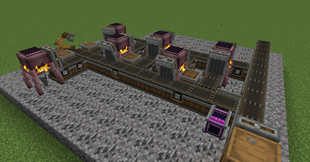 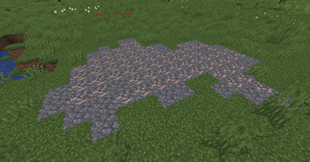 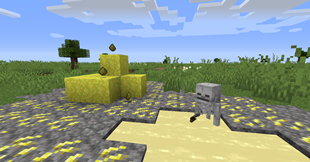 FactoriOres is a mod which adds special ore deposits and machines which can automatically mine them, inspired by the game Factorio.

– Sulfur: a resource found in ore deposits which can be mined and crafted into blocks of sulfur, which can then be set on fire to produce sulfuric acid, which is a liquid that damages non-skeleton-type mobs

– Gangue: a type of stone which generates around ore deposits and which is left behind when a ore block is depleted

– Miners: blocks which can be placed above ore deposits to extract the items within

– Mechanical Miner: requires rotation (from the Create mod) to work

– Fluid Extraction: some deposits contain fluids instead of items, which can be extracted in the same way so long as a valid tank is placed above the miner

– Lixiviant Mining: some ore types require a special type of fluid, called a lixiviant, to dissolve it to the point at which it can be mined. Sulfuric acid is one valid lixiviant, and can be supplied into a valid tank placed above the miner. The types of ore which require this can be configured, but by default it only applies to Immersive Engineering Uranium

– The One Probe: Ore deposit blocks display their amounts

– Worldgen should be configured via the vanilla datapack system. You may add json files at <packname>/data/factoriores/worldgen/configured_feature/<type>_deposit.json to override the generation configs for any valid ore. Example here

– The item which an ore deposit block yields is determined by the loot table at <packname>/data/factoriores/loot_tables/<type>_ore.json. Example here

– The fluid which a fluid deposit block yields is determined by the fluid of the bucket item in the loot table at <packname>/data/factoriores/loot_tables/<type>_deposit.json

– Currently the patch radius and patch depth parameters are unimplemented, as the vanilla lake code I used as a base is quite abstruse