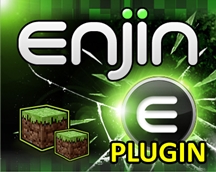 DonationCraft Features (Plugin side) – ALL FREE! We have now added a command where you can give users items using their UUID! It even gives them the item if they aren't on the server at the moment as long as TuxTwoLib (an optional plugin) is installed.

Basic Command Format
The basic command is /enjin give [player or UUID] [MaterialName] [quantity] You can also specify the damage of the item (useful for items such as dyes and wool) by putting a colon and the damage value after the material name, like this: /enjin give Tux2 Ink_Sack:5 The quantity is optional and as a default gives 1 of the item.

Example of a custom leather helmet with a custom name and red color: /give Tux2 Leather_Helmet -name &6Leather Helmet of Awesome! -color r255,g0,b0

The buy command will override any other plugin's buy command by default and is the default command, although you can change it easily either on the website, or in the config.yml file.

Setting up the Heads/Sign Stats Display Setting up the display is extremely easy.

Each type of stat has specific text you will need to put on the sign. It consists of the type of stat, and a number, denoting how far back in the history this sign is for. 1 = most recent, 9 = least recent. The place to put the number will be designated by a "#" symbol. So if the code to put on the sign was [donation#], if you wanted the second most recent donation you would put [donation2] on the first line of the sign. For certain types of signs there are different subtypes (day/week/month, item id, etc.) For this type of data it goes on the second line of the sign.

As of this moment the plugin tracks bans and pardons and sends them to enjin as well. This feature is not currently implemented on Enjin, although we were told by bukkit dev staff we had to document this feature on the plugin page. You can disable this feature in the plugin by setting the option "listenforbans: true" to false.

Stats this plugin tracks and sends to the website

These features can be turned off by setting the enableplayerstats variable to false in the config.yml. These are transmitted to Enjin.com for use on your website and are not viewable by anyone unless you choose to make them public on your Enjin website using the control panel.

Other information this plugin may collect

In some cases we may ask for an Enjin report. This report contains a detailed report of your server and includes information we need to help diagnose errors. These reports are not automatically sent to Enjin and are only stored in a file on your server which you can go through and remove any information you don't want us to see. The information collected is documented below:

This plugin checks for and downloads updates automatically

If you would not like to receive updates/notifications of updates automatically you can always turn it off in the config.yml file by setting the autoupdate variable to false, which will disable auto update checking and downloading.

Other stats this plugin collects which cannot be disabled